Groundwater finds its way to surface water – but where?

Heather Martindale (GNS Science Water Dating Laboratory Snr Technican) recently graduated with a Masters in Environmental Management from Massey University in Palmerston North. Her project looked at “The use of radon and complementary hydrochemistry tracers for the identification of groundwater – surface water interaction in New Zealand”.

Why is Radon used as a tracer to find out where groundwater flows into surface water?


Radon-222, a colourless gas with a half-life of 3.8 days, is generated by the decay of uranium present in rocks and soil and is abundant in groundwater. While, radon has a very low concentration in surface water (rivers, streams) due to degassing (water releasing the gas to the atmosphere), the concentrations are slightly higher at, and/or immediately downstream of groundwater leakage to surface water. This concentration difference makes radon an ideal tracer to identify locations of groundwater leakage to surface water.
Heather’s Master’s project involved the collection of water samples at 500m – 1000m intervals in a 14km stretch of the Hutt River. She mixed the samples with a scintillation cocktail. When radon radioactively decays, it emits energy in the form of an alpha particle. This energy is absorbed by the scintillation cocktail and then released as a measurable light pulse. Heather’s study clearly demonstrated the usefulness of radon as a tool for identifying groundwater leakage into surface water, as shown in Fig. below.


The XRF device sends out a continuous x-ray which hits an atom and ejects an electron from the atom’s orbital shell. This gap gets filled by an electron dropping from a higher energy orbital shell to a lower energy orbital shell releasing a fluorescent x-ray (Figure 2). It is used to analyse a substance to determine the chemical composition of the sample of interest. Nearly every element has a unique fluorescent x-ray energy signature.


This instrument was used to analyse soil compositions at various locations around Dunedin City as part of an urban geochemical baseline survey to help assess the state of the environment in our cities. This provides a chemical snapshot that can be used to assess human and geological influences. The measurements so far of lead (Pb) and arsenic (As) concentration by hand-held XRF are comparable to Pb and As concentrations measured by lab XRF (taken from a more regional soil study as shown in the graphic opposite in Figure 3). These results show that Dunedin City soil has safe levels of Pb and As and that hand-held XRF results can be used to supplement laboratory XRF data for certain elements.

Magnetic field measurements are found in many applications around us. This ranges from the compass system in our smartphones, vehicle detection for traffic lights, metal detection at airport security to non-contact measurements in power supplies. While many existing technologies are available, our industrial partners have identified gaps where existing technologies are insufficient in their current form. For instance, there is a need for sensors that can measure low magnetic fields reliably even after exposure to large magnetic fields. This means overcoming the magnetic remanence naturally occurring in most magnetic materials used in sensors. Another challenge that was presented to us was to be able to measure both low and large magnetic fields with a single compact system. Our approach, considering the use of nanostructured materials, is aimed at solving these challenges and provide our partners with useable and more efficient alternatives to existing solutions.

Dr John Kennedy and his team of scientists at GNS Science developed a new process using ion implantation and thermal processing in order to create a new material in which electrical resistance varies with a magnetic field. Currently magnetometer devices measuring large magnetic fields are based on the Hall effect. However, they exhibit a large temperature dependency which is not favorable for easy measurements. The materials developed by the team use a different mechanism which is more resilient to temperature changes. It relies on having iron nanoparticles, with dimensions of the order of a thousand times smaller than the diameter of an average human hair, on the surface of an insulator 1.

Ion implantation is a technique used to modify the composition and properties of the  surface of materials. It uses a particle accelerator which first strips electrons from some atoms to create ions which are then accelerated and funneled towards the sample to modify it. The bombarding of ions through this method progressively modifies the material’s surface. This technique is commonly used in microelectronics to precisely tune the properties of electronic components on a chip (electronic circuit on a small plate of silicon). In fact, most consumer electronics have now had components treated with such a technique!

Sensor are made by implanting iron atoms into the first 30 nanometres of a 400 nanometre thick substrate of SiO2 [Silicon dioxide], (1 nanometre = 0.000000001m). The ion implanted target is then heat treated for one hour at 1000 °C to form iron nano-particles.

Uniformity of the produced iron nano-particle is determined by measuring the surface with an Atomic Force Microscope (AFM). The AFM moves over the sample surface line-by-line and the up and down movements get recorded and stitched together to give a 3D topography image of the surface at very small scale. 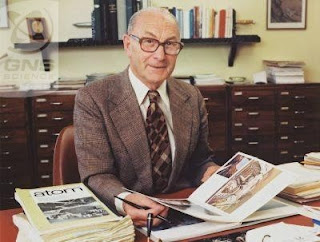 Thomas Athol Rafter was born in 1913 in Wellington. After graduating in 1938 at Victoria University College, he started teaching, as there were no jobs as a research scientist available.
In 1940 a position at the Dominion Laboratory became available and he started working on analysing coal ash and uranium bearing minerals from the West Coast beach sands.

In 1948, almost a decade later, the New Zealand government decided to establish a group of scientists within the DSIR (Department of Scientific and Industrial Research) to do nuclear research. Rafter’s role in the newly formed group was to further develop the method of radiocarbon dating,

which had been invented three years earlier in the United States by Willard Libby. Rafter’s pioneering work and the resulting publications form a major part of the core literature in radiocarbon dating. In 1959, Rafter became the director of the newly founded Institute of Nuclear Sciences in Gracefield, Lower Hutt. He held this position until he retired in 1978.

Thomas Athol Rafter passed away in 1996 in Wellington.

Current radiocarbon research applications including 14CO2 as a tracer for fossil fuel emissions, bio product verification, and chronology for Paleoclimatology and aging of shell fish. These topics will be explained in future posts.
Posted by Unknown at 13:30 No comments:

What do children breathe inside school classrooms?

Air particulate scientist Bill Trompetter led a project to determine levels of air particulates and their sources inside school classrooms. This was achieved by comparing the air quality from a normal classroom with a classroom that was fitted with a ventilation system, providing heated air through a solar collector. This study is mainly driven by the fact that children are more affected by air pollution than any other age group and very little is known of healthiness at schools, child care centres etc. where children spend a significant amount of their days.

Samplers were installed in two classrooms and an extra one outside. Air particulates PM10 (particulate matter up to 10 micrometres in size [1 micrometre = 0.000001 metre]) are deposited onto a polycarbonate filter and were collected hourly for 3 weeks.
The air sampling campaign was accompanied with a throat swab test for Streptococcal group A, C and G, as well as health related absenteeism quantification and an after test questionnaire.


But where is the link to nuclear science here? Well, it is the measurement technique!

The technique used for quantifying and qualifying the composition of the air particulate samples is PIXE (Proton Induced X-ray Emission). This method uses accelerated protons (Hydrogen nuclei) hitting atoms on the target filter and resulting in an elemental specific signal (elemental specific X-ray energy) which gets detected. 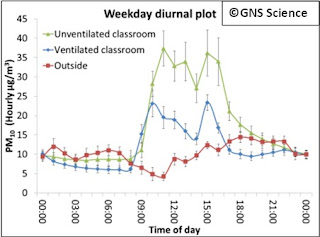 This study clearly shows that insufficiently ventilated classrooms have a higher concentration of particulates in the ambient air than a ventilated room during school hours. Elemental analysis shows the air particulates are mainly soil dust stirred up from the carpet when the classroom is occupied with the children.

A continuation of this project will look into an improved cleaning regime to reduce dust exposure to children inside classrooms.
Posted by Unknown at 14:37 No comments: